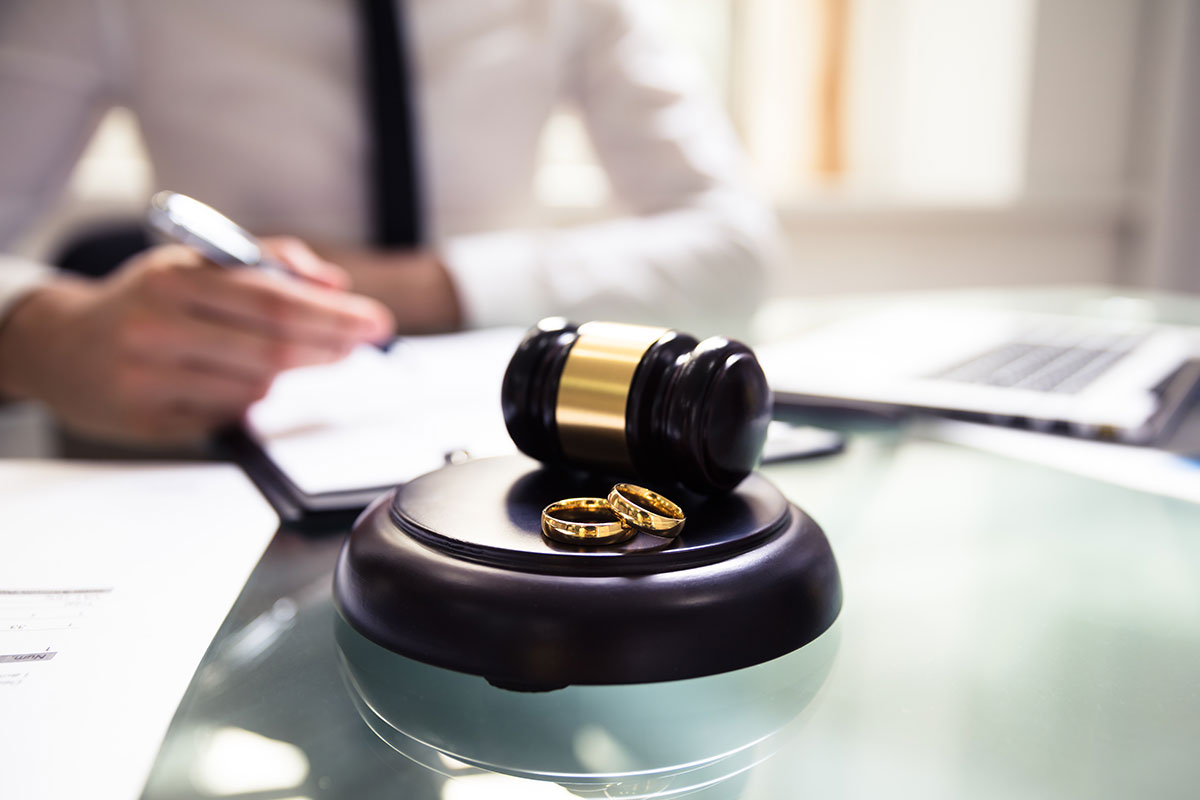 Attorney Heidi Opinsky talks about divorce litigation, and she discusses alternatives to litigation such as mediation and collaborative law.

John Maher: Hi, I’m John Maher, and I’m here today with Heidi Opinsky. Heidi is a divorce and child custody lawyer in Connecticut and New York and has over 30 years of legal experience in mediation, collaborative law and litigation, and she represents clients in a full spectrum of family law needs. Today, we’re talking about divorce litigation and alternatives. Welcome, Heidi.

When Can a Divorce Lead to Litigation?

John: Great. So Heidi, when can a divorce lead to litigation?

If it does go to litigation, like I said, it could get costly. You could have discovery issues that get very costly. You can have motions in court that then have to be decided by a judge. You can end up… The true model of litigation is you’re in trials or hearings; so there’s evidentiary rules; there’s delays; there’s calendaring issues with the courts, especially now during COVID. So you could be delayed until the court could even hear your case.

So there are other models. There’s the mediation model, and there’s also the collaborative model. And the litigation model is the advocacy model where each party has their own advocate or lawyer. Again, as I emphasize, it could still be a friendly divorce where you still have your own advocates, your own lawyers on either side, and you’re not necessarily looking to the court to make a determination or a decision.

People end up in litigation, mostly when they’re angry, and anger leads to contentiousness. And some people have this belief that somehow someone with a black robe is going to make a better decision for them than themselves, which obviously is not the case and not preferable. It’s always better for you to make your own decision with your own details and your own objectives than to leave it to a third party, a judge, who’s wearing a black robe and has a very congested calendar and is going to give you scant attention at best. And you’ll end up with a cookie cutter decision, and that’s what people don’t understand.

When I tell them we’re going to have to try a case, even though I’ve been litigating for over 30 years, it’s always Russian roulette. You never know for sure or with any guarantee what a judge is going to do. I’ve been in cases in litigations where the evidence goes in beautifully. We think it’s a slam dunk. “You’re going to win this”. And you get a curve ball from a judge, and it’s coming out of left field. That’s why we have appellate courts and you end up on appeals. So the other two models, rather than litigation, are collaborative law or mediation.

Collaborative Law in a Divorce Case

John: Okay. Why don’t we start with collaborative law? And maybe tell me a little bit about what that is, and what’s involved in it, especially in terms of how it applies in a divorce case.

So of course, put your thinking cap on. We’re all lawyers; we can think to be creative. So many times, creative lawyers in the collaborative law model will write into the retainer agreements, “you don’t lose us as lawyers, even though we’re going to treat this case as a collaborative law case.”

So, the other difference is you have different people who are representing your respective interest. If there’s a psychological aspect regarding children in custody or therapy, you have a psychologist that’s involved, doing that portion of the collaborative law model or approach. If you have financial issues, you have an expert forensic accountant who’s retained to do that aspect of the case. If you have pensions, when you need an actuary to value a pension, you have them doing your case.

John: Okay. So there’s still two lawyers, one for each person in the divorce case, but all of the other people are a neutral central party, and you don’t have to have separate ones of those for everybody.

Advantages and Disadvantages of Collaborative Law in a Divorce Case

The problem is, as you would imagine, in the true collaborative model, it still starts getting very expensive when you’re hiring that team. Right? So there’s no guarantee that just because you’re hitting the collaborative model, as opposed to the adversarial model, that it’s going to be less expensive. In fact, because you’re already signing up that you’re going to have that team, it’s already getting quite expensive. So I’ve found that the collaborative model doesn’t really work always, and anyone can decide they don’t like what one side is saying or doing, or the team member, and pull the plug and then you’re back to square one.

John: And then it leads to litigation from there. Yeah.

Advantages and Disadvantages of Mediation in a Divorce Case

Heidi: Yeah, and you’re starting over. So then people hear the buzzword “mediation”. Everyone thinks mediation’s going to be less expensive. Well, then again, a mediator is one lawyer who’s working for both parties, not representing both parties. And from the inception, they have to very clearly, expressly state, “I’m not representing either side.”

Heidi: I’m neutral. Here’s also a problem. There’s no certification for a mediator in the law. So what happened, when mediation was in vogue and started and was a big brouhaha for everyone, “I’m going to go to a mediator. I’m going to save money. I’m not going to litigate”, what happened was you’d have therapist mediators; you’d have psychologist mediators or licensed therapist mediators. They know nothing about the law. They know nothing about discovery. So what would you imagine would happen?

What would happen is you’d get these horrendous agreements because they don’t know how to write an agreement. And a mediator is there to write an agreement as well as to negotiate the settlement and resolution. So you’d have these horrendous agreements that are not written by a lawyer. They have terminology or lack thereof. They don’t state what they’re supposed to state because a therapist is a therapist. They’re not educated and trained to be a lawyer and to write legal documents with appropriate terminology.

So, what would happen is one party controlled the mediation typically, and it was usually the monied spouse. There was no discovery. I’m just giving you the difficult aspects.

Heidi: There was no discovery. The controlling spouse with the money controlled the mediation, and you ended up with a very one-sided agreement that was horrendous for one side and very positive for the other side, who really wasn’t in mediation to be fair and equitable.

Heidi: And then you’re starting from square one with hiring two adversarial lawyers. And so what you thought was going to be very cost-effective, and that’s what people still believe will happen, is not necessarily what would happen. Now, that’s not to say I’ve given you all the pitfalls and negatives.

The Solution to the Mediation vs Collaboration Debate

John: Sure. Yeah. So what’s sort of the solution or the best-case scenario?

Heidi: So, the best-case scenario, in my opinion, if you are going to go to mediation, is to hire a lawyer mediator, number one, who is educated and knows the issues of discovery and knows the terminology in preparing an agreement. After mediation, the mediator typically says, “You should go to your own attorneys or hire or retain an attorney as a review council for this agreement because I’m not representing either one of you.” Okay? And that typically, in the good scenario, would happen. You should have a review council of your own to review it, not necessarily to put a kibosh on it and to tear it up and start over, but to review what was there and to understand how much discovery was undertaken by the mediator, what did you review, what was your knowledge when you entered into this agreement, what were you informed about, how comfortable were you with the objectives and the results, etc.

So, they’re your review counsel, and you’ll make changes to the agreement that the mediator wrote. And in good mediation, they should expect that. It shouldn’t just be that you’re going to sign on the bottom line just the way the mediator wrote it. There could be changes, but not necessarily that you’re starting from square one. So that’s a good mediation where you both have review council, then speaking to the mediator saying, “Well, my client’s uncomfortable about this. We would like to revise that. What do you think?” And everyone still works together and ultimately continues with the mediated agreement with some revisions.

Heidi: And collaborative law, like I said, it could work well, but I think the concept was that in the true concept when it started and it became part of the nuance in law… collaborative law came about after the mediation or mediators came about. It was newer. The concept was that it would still truly be a friendly divorce, but everyone was going to have the opportunity to get neutral people on a team and that the attorneys were going to work very collaboratively to bring the parties together for a settlement.

Heidi: And also, just to shore it up, with regard to the team, is there really one expert forensic accountant reviewing the monetary aspects and financing in a divorce, like if a business is involved? Okay? Let’s say ABC Corp or XYZ, LLC, or you own restaurants or you own professional practices or you own real estate, you own stock and you’re in finance, can that expert forensic truly be neutral?

Heidi: It’s hard to be truly be neutral, and the reason why is it’s not black and white. It’s a very individualistic approach when expert forensics value… There’s different models, different means of valuing anything. So can they truly be neutral? They can’t. There is no true neutral forensic accountant.

How an Attorney Mediator Stays Neutral in a Divorce

John: Have you worked as an attorney mediator for divorces before? And when you do that, how is it that you do try to remain neutral in that case and work with both parties equally?

Heidi: So what I do is I explain to both of them, when I meet them, that “I don’t represent either one of you”, that “I’m pleased to see that both of you are of the mind that you don’t want to be contentious and you don’t want to litigate, so that’s a positive”, because you can spend a lot of money in court in explaining to them and looking at their ledger sheet of assets in the marital estate.

And I find that if you really instruct the expert, that’s truly what they’re going to do, that it’s about as fair as you’re going to get. If they’re not of the mind that that’s what they’re doing and they’re just told “you’re neutral”, I find many times that they get controlled by the monied spouse who owns the business, who controls the assets and the income and the appreciation and all of that. So you just have to be vividly and expressly clear from the get-go, “this is a true, fair, equitable resolution of what we want.” And if you do that, I think you’re going to get it as about as fair and equitable as you can.

John: All right. Well, that’s really great information, Heidi. Thanks again for speaking with me today.

Heidi: I appreciate it, and thank you.

John: And for more information, you can visit Heidi’s website at ctnydivorcelawyer.com or call the Law Offices of Heidi E. Opinsky, LLC at 203-653-3542.